Who loves ya, baby? The KoJaKitchen Truck Does. 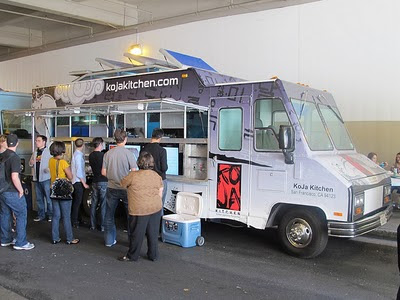 OK, so it’s the KoJa Kitchen, not the Kojak Kitchen, with KoJa standing for Korean-Japanese fusion. But to me, the truck’s name conjures up images of a crusty on the outside, soft on the inside fictional NYPD detective of the 1970s and 1980s.   And KoJa Kitchen loves ya, baby; the proof is in the food it gives you to eat.
I caught up with the KoJa Kitchen truck on its Off the Grid debut at 5th and Minna on Wednesday.  The new, elegantly wrapped truck has some nice high-tech bells and whistles suitable to a Food Truck 2.0, such as the LCD monitors displaying a real time updatable menu and images of the food.   KoJa Kitchen serves three varieties its signature “KoJas” along with “Kamikaze Fries’ and  a dessert called “Mochimisu,” Tiramisu layered with house-made chocolate mochi. 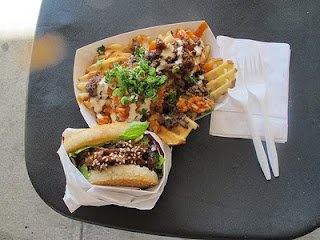 On this occasion, I got to try a Korean BBQ Beef KoJa accompanied by an order of Kamikaze Fries.  A “KoJa” is essentially an Asian-pedigreed burger or large slider, hefty enough to be a good value at its $5.00 price.  The genius of the KoJa is the bun, which is made of two hand-shaped patties of cooked rice which have been “toasted” to a crunchy brown on the outside, while soft on the inside.  The filling in my Koja was a basic bulgogi with “sautéed onions, sesame vinaigrette slaw drizzled with our signature sauce.” The beef was cooked to a tenderness, not overly cooked as bulgogi sometimes is, and spicing was sharp and clean. (The heat can be kicked up on request).  Biting into it created a sensational mélange of textures to go with the bold flavors; be warned that a few bites in, the bun begins to disintegrate into the filling, hastening the mélange.  It’s a somewhat messy sandwich, but messy in that fun “don’t bother me I’m eating” kind of way.  (Grab a fork with your order in any case, and maybe even request a paper "boat" to catch the spillage if you are as clumsy as me.)
The Kamikaze fries turned out to be waffle fries (also carefully cooked) topped with more bulgogi, “sautéed onions, kimchi, green onions and drizzled with our signature sauce and Japanese mayo.”  It’s a sizable order, really a main as much as a side (and in fact costs a dollar more than does the sandwich) but so tasty that I had no difficulty finishing mine up even though I’m not generally a huge French fry fan.
Other “KoJas” on KoJa Kitchen’s current menu include Korean BBQ Chicken with Pineapple, and Teriyaki Vegetarian Chicken with Pineapple.
With refreshing originality and sure execution, Koja Kitchen looks like a food truck winner.