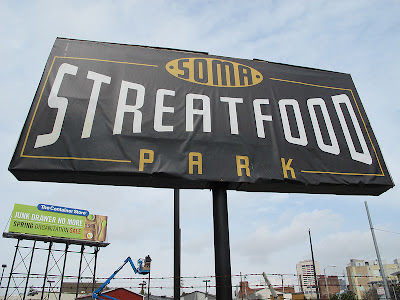 Two months ago a flurry of reports (well, at least three reports) about a proposed food truck “pod” breaking ground South of Market excited the street foodie in me. It was to have permanent amenities such as an open roofed structure, picnic tables and restrooms, and was inspired by the now-renowned street food pods in Portland. Having heard nothing about it since, I had nearly forgotten the dream until a friend (thank you, Amanda!) informed me that a big new sign, visible from the freeway, drew her attention to construction activity at the site. The site is adjacent to Costco, so I resolved to check it out on my Costco run today.

Sure enough, the signs were up, the roofed shelter was up, and work was underway on some light stanchions. I was fortunate enough to be greeted by Carlos Muela, the genial force behind the project, and was able to ply him with questions. Muela, whose restaurateur parents (they own Picaro and Esperpento in the Mission) hail from Madrid, Spain, confirmed that the plans revealed in the January SF Weekly interview cited above were still operative, although the beer garden component is still a question mark, due to a maze of regulations which he is attempting to navigate. Most of the “difficult” construction work (e.g. the utilities infrastructure) has been completed, he said, and he foresees a launch by late April.

SoMa Streat Food Park, to recapitulate, will have space for 10 trucks at a time, which Muela plans to host in some form of consistent rotation. What he hope to emulate is the sense of community he felt at the Portland street food pods with their fixed locations, regular vendors and regular customers. He anticipates having no trouble filling slots, and plans to host some carts as well as trucks. He promises some vendors never seen before. The park will be open for lunch and dinner, seven days a week. The site has one thing money can't buy: one of the best microclimates in the city. Assuming he vets his vendors well, the project looks like a winner.

This post has been updated.  See added final paragraph.


The International Food Court at Bush and Kearny, closed by a fire in early 2008, may be poised for a comeback. The basement level food court, affectionately known as “The Dungeon” by many or simply “the place with the red awning” by some, was officially located at 380 Bush Street but had a coequal entrance (and awning) at 316 Kearny St. (Never mind that it was previously known as The International Food Center, or “the place with the blue awning.) It specialized in cheap, ethnic (mostly Asian) fast food from six stations. In its last incarnation, the IFC hosted Chinese, Japanese, Vietnamese, Burmese, Filipino and Mexican food vendors. The food was generally indifferent, though the lumpia from The House of Lumpia and the Burmese tea leaf salad from By the Bite had many fans (and where else in the FiDi were you going to find Filipino and Burmese food?) 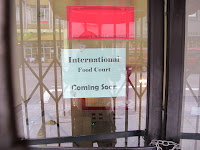 After the facility was closed by the disastrous fire, signs were posted at both entrances promising a reopening “soon.” Nobody held their breath, and that promise of "soon" faded with the ink on the signs.  Now, four years later, that “soon” may really be soon. Newly printed “Coming Soon” signs recently appeared, and  signs of activity have been spotted. within the past few days. Last Friday I observed an open door behind the grate at the Bush Street entrance, and people who appeared to be taking measure of the space milling about below. Lights can also sometimes be seen inside the subterranean interior from the street where previously there were none.

What phoenix will emerge from the ashes of the beloved dungeon?  It's unlikely that all six of the pre-fire tenants have been biding their time for the past four years waiting to resume, but at the very least we are being promised an "International Food Court" once again, and that is music to my ears. Given the recent upsurge in interest in ethnic street foods, the possibilities are tantalizing. I have yet to find any clues to the who, what or when of International Food Court II, but believe me, I'll be on it like Bulldog Drummond.

Amazingly, I found a pre-fire video by sflunch on YouTube (God bless the Internet!) which captures the spirit of a visit to the IFC.  If you were a devotee, it may bring a tear to your eye or a Proustian flood of memories.

[Update - 3/28/2012] Today when I wandered by the IFC site I noticed the grate and a door at the Bush Street entrance were open, and peering down the stairs I could see feet.  I descended the stairs to the hallowed space, and saw that the feet belonged to a whole Asian family of indeterminate denomination who appeared to be inspecting one of the cooking stations. Before I could converse with them, Another Asian male who appeared to be representing the food court interposed himself between me and the family . I quickly asked him if they were preparing to re-open, and he said "maybe in one month."  I then tried to ask if tenants had been found for all six food preparation areas; I'm not sure he understood my question, as his English seemed to be quite limited, but he appeared to, and answered in the affirmative.  He then waved me goodbye, saying "come back next month."  The space and the facilities appeared to be sparkling clean, though there was some standing water on the floor near the Bush Street stairway (probably from yesterday's deluge) so some issues may remain to be dealt with.  Fingers crossed.
Posted by Gary Soup at 7:53 PM No comments:

Off the Grid: Fort Mason Center Returns Bigger and Badder

The return of Off the Grid's flagship event at Fort Mason Center after its winter hiatus drove home to me the importance of the non-motorized (i.e. tented booth and cart) vendors to the character of street food in San Francisco. I had found my interest in attending the lesser, truck-only OTG events waning soon after Thanksgiving and the Fort Mason event's furlough , but Friday night's debut of Fort Mason Season 3 was miraculously restorative. Don't get me wrong – I have my favorite trucks (see this post) – but by and large the OTG satellite events tend to be dominated by hipster hobbyist trucks pitching to the Bacon-wrapped Pork Belly and Demented Donuts demographic. In retrospect, it occurs to me my go-to vendors in previous seasons at Fort Mason were always the tented ones; if I couldn't find something new there to tempt me, it was still worth the trip to the chilly veldt of the Fort Mason Center parking lot to grab something from El Huarache Loco, Azalina's Malaysian or Chaac Mool. What vendors like these may have lacked in variety, they made up in authenticity and value. You can't invent a new traditional street food every other week, after all.

Off the Grid: Fort Mason Center, 2012 version is bigger, better, and simply more amazing than previous editions. It's bigger both in physical size and number of vendors.  It's organized as before with tents along one side and trucks along the other, with a middle row of more trucks. However, the perimeter has been expanded outward in all directions, allowing for better circulation and more amenities, and the tent alley and outer truck alley have been flip-flopped. Matt Cohen swears this expansion has been accomplished without sacrificing any additional parking spaces. To break down the space allocation, there are scheduled slots for 16 trucks, 14 tented booths and and four carts. That adds up to 34 vendors at a time, according to my sterling math skills. There's also a bi-weekly rotation for five of the truck slots and three of the tent slots, allowing for an additional eight vendors, swelling the total to 42, not counting some likely turnover over the course of the 8-month seaason. As before, there's live music and a full bar, but a second beer bar has been added (tip: the line at this "back" bar was much shorter than the other one on opening night). There's also more seating overall and even some picnic tables within the event's perimeter, so you can enjoy your beer with your food in sit-down comfort if you're lucky enough to snag a table space.

As for the vendors, 16 on the roster are new to Fort Mason (and most of these are new to OTG altogether), including nine new tented vendors, four new trucks and three new carts. Some of my favorites are missing from the schedule, most noticeably Veronica Salazar's El Huarache Loco (which has moved on to bigger things) but enough new ones are of interest to me to remove the sting. Friday night saw debuts for tented vendors Lima Peruvian (anticuchos and tacu tacus), Wing Wings, Don Bugito (pre-Hispanic insect-based snacks), Bombzies BBQ (chicken kabobs), Kirimachi Ramen, and Belly Burgers (pork belly burgers). There was also one new truck, Eric Rudd's Fogcutter (formerly The Brunch Box) and three new carts: AK Double Up (Trinidadian Hot Doubles), Fat Face (New Age popsicles) and Alicia's Tamales. The rotation for next Friday promises traditional fish tacos from Cholita Linda, a new musubi vendor (Gohan)  and a truck named Eat on Monday, which is said to vend New American and Asian Fusion creations.

After casing the joint Friday night I made a beeline for the Lima Peruvian stall for an Anticucho de Corazon (beef heart skewer) and a side of Papas Wankas (a.k.a. Papas a la Huancaina). The beef heart was garnished with chimichurri and pleasant, if mild in flavor. It was very chewy (more chew and less snap than chicken heart skewers, by comparison) and may or may not be more work than you want your jaw to do. The cheese sauce on the papas was also a bit on the mild side, but maybe if enough people ask for it to be spicy.... Lima Peruvian also has other varieties of anticuchos, which I'll check out after trying a tacu tacu plate.

My second course was a surprising “Double” from the AK Double Up Cart. A “Double” or “Hot Double,” as I found out, is a popular street food in Trinidad. It's a taco-like hand food with a puffy, cumin and turmeric-infused flatbread “shell” and a filling of curried garbanzo beans garnished with chutney and a pepper sauce. A harmonious chorus of flavor, it's vegan, but the kind of vegan food that would keep life worth living for me were I to become a vegan.

My third and final sampling on opening night was from the oh-what-the-heck department, a belly burger from (you guessed it) the Belly Burger tent. It's made with pork belly, but it's not Yet Another Momofuku Pork Bun. Instead, the pork belly is ground (burger-like, heh), grilled, and served on a traditional soft burger bun. The variations on the menu are in the toppings, and I chose the “Classic” (fried chili pepper aioli, tomatillo pickles and Cotija) and a side of Almond Cumin Slaw. The pork belly patty was flavorful and not overly greasy, the dressing added some meaningful notes and the thing didn't gross me out at all. I mean that as a compliment, and as for the slaw, I don't think I'll ever spend a better $2 at an Off the Grid event.

Lastly, in case you are wondering, I did NOT wimp out on the Don Bugito cart. I enjoyed their wax moth larva tacos last summer at the San Francisco Street Food Festival, and they are not yet back in rotation on my bucket list.

See you on Friday.