Grand Hyatt's Food Truck Fakeout: It's the Off the Grid Food Truck in Drag 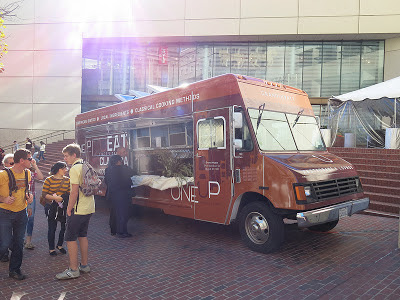 Tooling down Stockton Street to check out the Black Friday madness, I spotted what appeared to be a shiny new food truck being tweaked on the plaza in front of the Grand Hyatt Hotel.  It was emblazoned with the hotel's name as well as the name of the Grand Hyatt's new OneUP Restaurant and Lounge. I knew that the Hyatt had previously hosted some of Off the Grid's stalwart truckers, but was this their attempt to one up (as it were) the Hilton Financial Distract's permanent Coffee Shack with an actual food truck of their very own?  Well, not exactly, at least not for now. 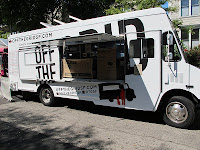 I talked to one of the principals who identified himself simply as "Ben" from the Hyatt (as did the badge on his shirt).  He told me that the truck was there as a two-and-a-half month promotion for the OneUP Restaurant and Lounge.  Initially it would be offering free samples of OneUP's food ("come back at two," said Ben, though I was unable to), but halfway through the promotional period they planned to actually be selling food from the truck. And what  becomes of the truck after its two-and-a-half-month run?  Well, it turns out that the truck will revert to its owner, Off the Grid. Yes, the truck is actually none other than the black and white one OtG uses to host chefs like it did for Farm255's Whitney Otawka at the 2012 San Francisco Street Food Festival, with a new wrap over its paint job. Ben also revealed that the truck was provided by a partnership of Matt Cohen (who forever finds new ways to monetize his resources and knowledge) and William Pilz of HapaSF, who presumable will consult on the fine points of serving food from a truck.

Before posting this I checked the Grand Hyatt's website for more information, and they apparently do have plans for a truck of their very own, so the Off the Grid truck in drag may be just a  stand-in until they get their act together. The plot thickens.
Posted by Gary Soup at 4:38 PM No comments:

When is a Food Truck Burrito Not a Burrito? When it's a Tunnbrödsrulle from Chef Pelle 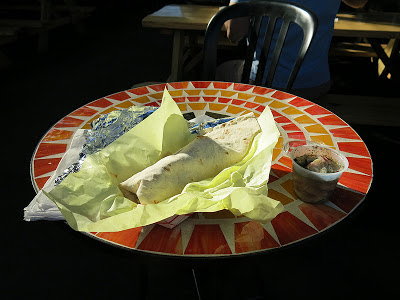 It's not often I find myself excited by a food truck that doesn't feature either Asian or Latin cuisine, but that's what happened today when I paid a visit to Pelle Nilsson's Nordic truck at SoMa StreatFood Park.

When the StrEat Food park tweeted that "Chef Pelle" was on the lunchtime roster I was curious enough Google the unfamiliar name. I was headed for Costco (across the street from the Park) anyway, and hopeful of finding something new to try out for lunch.  "Chef Pelle," it turned out, is Pelle Nilsson, who has been cooking in high-end venues since he was 14, traveled throughout Europe and Asia to broaden his knowledge of world food, and has had several executive chef stints in Hawaii and the Bay Area before turning his attention to catering. Needless to say, I was curious to find out what he would do from a truck. 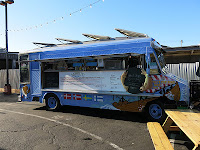 I circled the StrEat Food Park's vendors once looking for "Chef Pelle" before realizing that the truck I was looking for was identified as the "Nordic Truck."  It's a somewhat nondescript truck decorated with home-grown artwork and its menu sprawled across a white expanse in a less than elegant longhand. After perusing the menu, I selected what the menu described as "{Tunnbrödsrulle} beef & pork sausage w/ mashed potatoes, shrimp salad & cucumber salad wrapped in thin flat bread" and a side order of home-pickled herring.

When my unpronounceable lunch came, it had the appearance and heft of a burrito, but couldn't be eaten like one, because the fresh flatbread had nowhere near the tensile strength of a flour tortilla. Once bitten into, it began to look as messy as its combination of ingredients sounds, and I resorted to eating it with fork and knife (which is how Swedes are reputed to eat sandwiches, anyway). The sausage was long and hotdoglike with a bit of snap, and amazingly enough the range of textures (from the insipid mashed potatoes to the firm crunchiness of the cucumber slices) and flavors (the shrimp salad added a curiously salsa-like counterpoint) played together like a symphony. 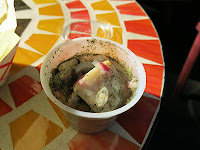 The home-pickled herring was also a tart bit of heaven in a plastic cup. The generous portion of herring (for  a $3 side dish) had a nice firm bite to it, and the pickling liquid was so refreshing I wanted to drink it all. It's a safe bet I'll return to try everything else on the menu, like the aquavit cured salmon crostini, the crab and shrimp melt with scallions, parmesan and provolone cheese, and ooooh, yeah, the Swedish meatballs. And it's an equally safe bet that I'll have a side of pickled herring each time. 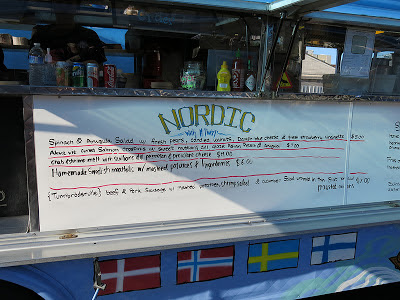 The Hongry Kong Truck: Does It Herald a Wave of Mobile Chinese Food? 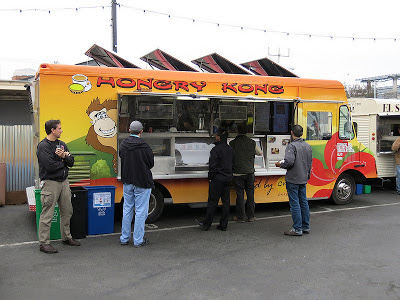 Chinese food has long been my favorite cuisine.  But when it comes to mobile vendors, it's scarcely been seen served up in San Francisco in any recognizable form.  Even Off the Grid's mammoth Fort Mason Center event, with its charter mandate to serve only Asian and Latin fare (or at least food inspired by those cuisines) has been hard pressed to come up with a truck dedicated to traditional Chinese food, though it has staged trucks featuring traditional Thai, Vietnamese, Indian and even Filipino dishes. Things may be changing for the better; recently I've become aware  of not one, but two food trucks that have come on line and feature Chinese food in traditional forms. I caught up with the first of them, the Hongry Kong truck today at the SoMa Streat Food Park.

Hongry Kong, as the name implies, serves Hong Kong style Chinese food.  This might bend the notion of "traditional" Chinese food a bit, but what's served up is bona fide cha chaan teng (teahouse) fare.  The menu is built around mix-and-match rice plates featuring pork chops or cutlets (pork, chicken, or fish) with a choice of saucing and of fried rice or spaghetti (natch).  There are also a variety of  dim sum-style side dishes including two types of egg tarts (butter crust or flaky crust), siu mai, skewers, fishballs and fried rice.  You can complement your entree with iced drinks such at HK style milk tea, lemon tea and or Ovaltine, and  a waffle with lychee or ube ice cream for dessert. The latter sounds more Filipino than Hong Kong-ese, but it's been 15 years since I was last in Hong Kong and it may be a standard by now. 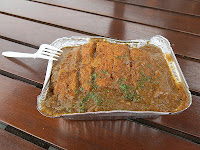 I ordered a fish cutlet in a peppery oyster sauce over fried rice.  It was about a 10-minute wait at high noon, and it came out piping hot. The sliced, breaded fish filet covered the entire dish, and the pepper sauce evoked a hundred pepper beef, pork, fish or chicken cutlets I had in a past stint in Hong Kong. It was a comforting and substantial lunch for $8.00, which seems to be a benchmark price for lunch in SoMa.