California Foie Gras? Vote With Your Feet -- Whether they are Webbed or Not 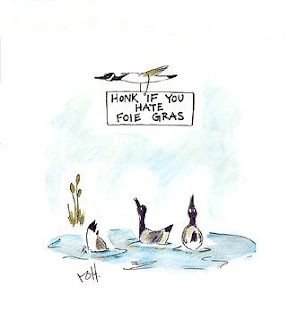 Chefs at the restaurants listed below have put themselves on record as wanting to overturn the California ban on foie gras.  If you care about this issue, you can point your webbed feet or your Manolo Blahniks toward or away from these establishments. It's your call.


[Note: If you are one of those unfortunates not familiar with xiao long bao, refer to Olivia Wu's evocative description in the piece she wrote for the Asian Art Museum's Shanghai exhibit blog.]

Last Saturday was the 20th anniversary of my xiao long bao epiphany, which occurred on April 7, 1992 at the very temple of xiao long bao, Nanxiang Xiaolong Mantou Dian, in Shanghai. To mark this anniversary I dragged my wife, stepdaughter and mother-in-law to the place I had long counted on for the best xiao long bao on this side of the Pacific, Shanghai Dumpling King in the foggy reaches of the Outer Richmond. We ordered two longs (steamers) of the precious baozi, as well as an order of sheng jian bao (xiao long bao's rough-edged cousin), some traditional Shanghainese appetizers, and an order of Lion's Head meatballs.

We were sorely disappointed. The xiao long bao had a mealy ground pork filling, insipid “soup” and wrappers that broke upon simply being looked at. To add insult to injury, the steamers were lined with parchment whereas they formerly would have rested on a traditional lettuce lining. SDK's xiao long bao, which I've been in the habit of recommending to others, had become as inept as they once were superior. The sheng jian bao were ever worse representatives of their species. As for the other dishes, my wife could have (and has) executed them better, as she didn't fail to point out to me.

What on earth had happened? I related my disappointment to my main Chinese restaurant gossip source (I'll call her Deep Teacup) who knows the Outer Richmond turf well.

I had to admit I didn't know. “The old owner moved to Millbrae,” she said.

I see another train trip in the works.
Posted by Gary Soup at 8:50 PM 1 comment: