The 2013 edition of Off the Grid: Fort Mason Center got off to what must be described as a roaring start on March 22. I've been to 78 or so Fort Mason Center events (if you can believe Foursquare), including all four season openers, and don't believe I have ever before seen it inundated so early in the evening or in the season by the hungry hordes that greeted the 4th edition's opener.  Commercially, at least, Off the Grid shows no signs of having jumped the shark. When it comes to food choices, however, a less sanguine picture is emerging. 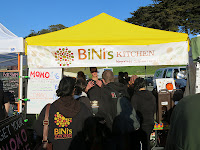 Depending of where you stand (or sit, if you can afford it) you may be either thrilled or dismayed by the changes that Off the Grid: Fort Mason Center has undergone, Most visible is the "VIP" area featuring reservations-only $40-$50 prix fixe dining from four vendors, including two of the finest Bay Area street food providers, away from the hoi polloi. Here you'll get seating, heating and shelter from the elements, and your own private bar with a "curated" drinking experience.

Even it you choose not to buy into the "Chef's Table" elite,  you'll be happy to find more booze queues for designer label cocktails and artisan beers, more (or at least better deployed) picnic table seating, and louder canned techno-beat music from DJs with names. You'll also find new novel treats like gourmet corn dogs and ice cream tacos.

What you won't find at Off the Grid: Fort Mason Center 2013 are noshes  like classic Peruvian anticuchos, fiery som tam, a cochinita pibil salbute, fried Tianjin dumplings or a Trinidad "Double." And you can bet your sweet patootie you won't find the pre-Hispanic insect protein-based cuisine of Don Bugito. There are far fewer food choices this year than last for people who like close-to-the-bone Asian or Latin street food, and it appears that the more authentic or exotic the food, the less likely its vendor was to make the cut when a diminishing number of slots for 2013 were doled out.


Off the Grid: Fort Mason Center was established to create a unique San Francisco night market experience that highlights the vibrancy and culture of Asian and Latin Street Food markets, and provides legal opportunities for food entrepreneurs to showcase their products.

There's always been a little bending the rules, of course, to round out the offerings. You could sell cupcakes or kettle corn if you included an "Asian" flavor such as pandan. (Ironically, they do sell unflavored kettle corn on the streets of Shanghai these days.)  It was easy to wink at this dodge as long as these hipster fetishes were overshadowed by the number of more or less authentic Asian or Latin offerings available, as was the case through last year, when Off the Grid: Fort Mason seemingly reached its peak. It's harder to do so today.

I compared the roster of vendors for 2013 with the rosters for first two Fridays in September 2012 (a handful of vendors were bi-weekly and rotated).  Of the 35 vendors you might have encountered over those two Fridays in September, 2012, 18 have either been written out of the plan, self-deported, or exiled to Oakland on Friday nights; 17 have returned for 2013, along with 10 new (to Fort Mason) vendors in the public area.  It's somewhat problematic categorizing vendors by ethnicity, on account of fusion and crossover trends, but by my own classification 24 of the 35 vendors at Off the Grid: Fort Mason Center in 2102 were manifestly Asian or Latin food vendors, but only 14 of 27 in 2013.

How does this net loss loss of 10 ethnic vendors break down?  Mexican cuisine was the hardest hit, with five vendors of Mexican food whittled down to one. Alicia's Tamales returned for 2013, but gone are Chac Mool (Yucatecan), Cholita Linda (Tacos), Delicioso Creperie (sweet and savory crepes), and Don Bugito (pre-Hispanic insect-based cuisine).  You won't even find a genuine Mexican taco at Off the Grid: Fort Mason Center in 2013, unless you consider the Taco Guys' or Rocko's Chocolate Tacos authentic. Also missing this year in the Latin food  department is Lima Peruvian Food, with its classic beef heart anticuchos.  You won't find Argentine empanada vendor El Porteno around either, but will find new Argentine empanada vendor  El Sur in its stead.

Asian food choices were even harder hit over the intersession.  You will find NO bona fide Chinese fare, with the departure of the wildly popular Happy Dumplings; likewise, you will no Thai food, with both its 2012 vendors (Phat Thai and House of Siam) among the missing from Fort Mason. Vietnamese food and Indian food vendor slots have each been reduced from two to one, with An the Go and Kasa Indian, respectively, on the outs at Fort Mason.

If you are craving ramen, you won't find Kirimachi around with its $8 ramen bowls, but you can avail yourself of new vendor Chotto's $12 bowls.  Korean comfort food? Local legend Seoul on Wheels and its robust menu have been banished to Oakland on Friday nights, but perhaps you can make do with a beef wrap or not-so-Korean fried chicken sandwiched between two waffles from new vendor Bok Ssam.

In fairness, I did find one bright spot, Asian food-wise, among the new vendors.  That would be Bini's Kitchen, another La Cocina product, now gracing Off the Grid with Nepali food, including delicious momos. (Get there early for the vegetarian ones, they sold out in the first hour on opening night.)

Who else will you not find around at Fort Mason Center on Friday nights this year? You won't find AK Double Up (Trinidad doubles) or New American/fusion/crossover purveyors Brass*Knuckle, Eat on Monday, Kung Fu Tacos and Wing Wings.  They're gone too.

Asian and Latin street food market or Gen-Y scene? Check it out and decide for yourself. And enjoy an artisanal corn dog with your hand-crafted cocktail while you're there.