Here's a nice little slice of street food anthropology from CNNgo.  The first person narrative is also a good example of the soft Jiangsu accent.  The popcorn method he describes is the traditional "cannon" method which startles children and delights the oldsters. Oh, to be in Shanghai now that September's there!

You scuttle along the Embarcadero until you are in front of the gaping maw of a bulkhead building.  Glancing over your shoulder to see if you are being followed, you duck into the building and peer into the gloomy interior of the long, barnlike structure.  In the distance you can barely make out the outline of a van, silhouetted against a huge incongruous Union Jack. You trudge along a railroad track, a vestige of busier times at the port, for nearly 300 yards, along the way breathing in the heady aroma of fresh-caught fish emanating from a fish wholesaler at the pier.   Eventually you find yourself standing in front of a mobile canteen.

You know what you want, and hand $7.00 to the cheerful woman.  In a few minutes, she delivers to you a large, steaming hot container of savory soup chock full of plump, meaty pork and beef wontons, and sauteed fresh vegetables and mushrooms.  It's a tasty, filling potion guaranteed to cure any flu.  As you turn to leave with your bounty, you glance up at the lengthy bill of fare posted on a signboard.  Along with an extensive list of Hunan-style Chinese food  it includes quesadillas and other Mexican specialties, perhaps a tribute to the truck's former use. You vow to return to try the Mongolian menudo. 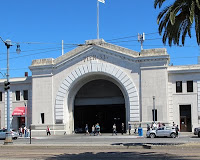 Pulp fiction?  An outtake from Les Bas Fonds de Frisco? No, it's all true, even the Mongolian menudo on the menu.  The truck is The Wonton Stand, a.k.a. Eva's Catering, and the pier is Pier 33, hard by the Cruise ship terminal.  It's no underground operation, but a fully permitted, fully equipped food truck of the classic taco truck mold.  Eva is real, and her partner is reportedly a former cook for  Brandy Ho's Hunan restaurant (I'm still wondering about that Mongolian menudo.) So check it out. 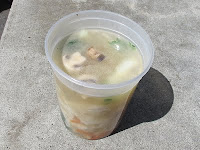 One more thing, though, it's best (as it always is) to have a Plan B.  I went looking for it recently, at high noon on hump day, and it was nowhere to be seen.  Had Eva retired, or moved to Oxnard?  Apparently not.  "They come and they go," said the testy warehouseman I interrogated. "Sometimes they are here in the morning, and sometimes they are here in the afternoon.  Sometimes I see them, and sometimes I don't." 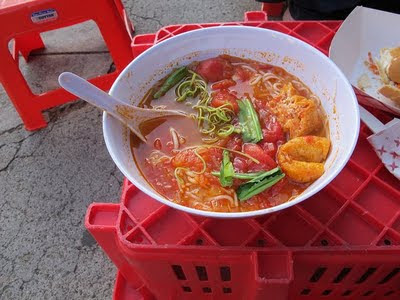 I've been intrigued for a while with the elegantly named "Rice Paper Scissors" collective (well, duo) but never caught up with them until last night. What's grabbed me about the team of Valerie Luu (@littleknock on Twitter) and Katie Kwan (@kitchensidecar) is their obsession with Vietnamese street food, and especially with their desire to keep it real, and not run it through the Hipstamatic. Valerie and Katie run what may be described as a guerilla" popup because its location varies (now that's a popup). You have to follow their "corporate" Twitter account (@ricepapersf), not the individuals, to find out the location the day of the event, as I discovered way late.

Last night's event was at (and in front of) an industrial space on 20th Street near Shotwell in the Mission. Service began at 6:30 and I was there at 6:30 sharp. Being a Senior Citizen, I go for the Early Bird Specials; "special" in this case means no long lines or long waits. My early arrival also enabled me to snag one ot the hallmark little red plastic stools (a bow to street food verisimilitude) and an overturned plastic "milk crate" serving as a table.

RPS thoughtfully provides the menu in advance by email, so you can do your research (and your fantasizing about delicious street eats) ahead of time. I went armed with my selection of two small plates -- Butter Braised Sweet Corn and Dried Shrimp and Wild Rock Shrimp Chips -- and one main, Crab and Shrimp Rice Noodle Soup.  There was a featured, order-in-advance dish on the menu, Pan Seared Turmeric Fish, but I demurred because of Guilao Fear of Fish Bones (GFFB) Syndrome and too many close encounters with yellowfish soup at home and abroad. 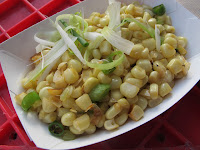 The corn and shrimp dish (bap xao) was one of the most delicious thing I have tasted in a long time and little short of transcendental. Katie Kwan, according to her blog, is obsessed with it and I immediately saw why. If I ever get to Hanoi I can imagine searching for the best dish of bap xao the same way I am always searching for the perfect bowl of xian doujiang on the streets of Shanghai.  Described on the menu as "Barbegelata Farms corn sauteed with Thai chili and scallion oil," it is simplicity itself in concept, but combines sweetness (from the corn), saltiness (dried shrimp) and chili spiciness in a wondrous trifecta of flavors that's probably difficult to hit on the nose. Rice Paper Scissors did it.

I can also say the shrimp chips (which wise Google tells me are called bánh phồng tôm) were the best I've ever had. This is not surprising since they were the first I've ever had that were made from scratch, not from opening a bag or throwing some disks out of a box into hot oil. They were described as housemade, using wild caught wild shrimp, and had just the right crunch, saltiness and oiliness. 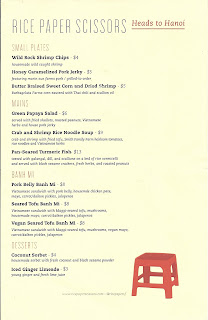 My main course, the crab and shrimp rice soup, was somewhat less rewarding. It was a complex and obviously labor intensive affair, with the pulverized crab and shrimp in a melange of tomatoes, dried tofu, herbs and rice noodles, but perhaps too subtle for my untrained palate. I probably would have insulted it by squirting sriracha into it if there had been  a bottle of hot cock handy. To me it mostly tasted of tomato; perhaps the designer label heirloom tomatoes were too intensely tomatoey, or it could be that the dish was just too reminiscent of the numerous bowls of tomato and egg soup that I've been fed whenever my wife was short on cooking time.

Tomato soup aside, I'll eagerly return for RPS's next "ghost" event, as they call it, and try anything they put on their menu, particularly along street food lines. And if they run out of new-to-me items, there's always their banh mi awaiting.

On a side note, I left the popup an hour or two before Mister Anthony Bourdain made a "surprise" appearance (which had been hinted at by  a local food blogger and anticipated by a clutch of people armed with cameras and an air of expectation). I regret missing the great man's presence, but I can gloat about once again beating him in discovering a street food venue. By a nose. 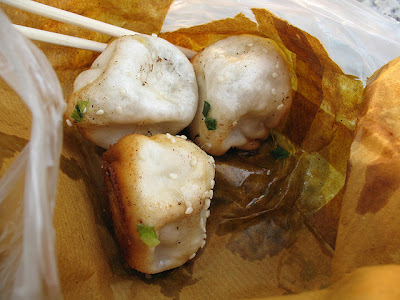 I spend a month in Shanghai every year or two, and one big reason is street food.  Wandering far-flung neighborhoods (made ever easier by Shanghai's rapidly growing Metro system) in search of a great bowl of noodles, serving of deep fried "stinky" tofu or skewer of spicy grilled lamb kabobs fills many of my days. The "ad hoc" nature of street food clusters -- chased from one neighborhood by development, only to re-emerge elsewhere -- makes the hunt all the more fun.  I was distressed, therefore, to read this article recently in Shanghai Daily:

GRABBING a street-food breakfast on the way to work could soon become a thing of the past for Shanghai residents, as the unlicensed vendors will be banned starting September 1, when the Shanghai Food Safety Regulation takes effect. All food sellers will be required to have a license, and while current street vendors can apply for licenses, they must operate their businesses only at designated spots and during certain times.

"We've already set aside designated areas and periods for street vendors, outside of which street food selling are prohibited," said Yan Zuqiang, director of the Shanghai Food Safety Committee.

All vendors must register at their local government or neighborhood committee and apply for a license. Urban management officers will watch for illegal vendors, who will face fines of 500 yuan (US$77.5) if in violation, Yan said.

I'm really not that put out by the licensing part -- just a matter of paying somebody some fees, says my wife; it's the "designated areas and periods" that bothers me.  Historically, Shanghai's street food venues have been highly decentralized, woven into the fabric of neighborhoods.  Ghettoizing them into "hawker centers" or other predictable locations will take the fun out of discovery.

Here are some random pictures of street foods and vendors taken over the past five years.