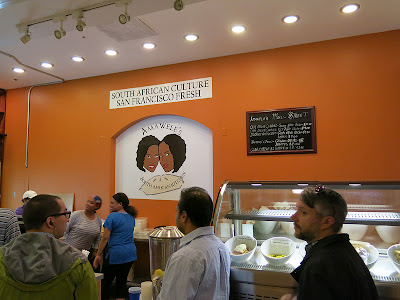 Sometimes you find things in the oddest places. Tucked away in the northwest corner of the cavernous Rincon Center food court, home of the grandiloquent dim sum palace Yank Sing and a neighboring flock of well-scrubbed and generally dumbed-down quick service outlets, you'll find Amawele's South African Kitchen.  Yes, it's shiny and new, but it's a mom-and-pop (uh, make that mom-and-daughters) operation and boasts a menu filled completely with Durban street food-type items entirely new to the eating experience of most of us. 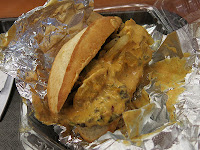 I headed to Amawele's today hoping to test drive Durban's iconic Bunny Chow, which is featured on their menu, but they were out of it by 12:45 when I arrived.  I'll get back there for that and have a full report later (hint: "bunny chow" is not a lettuce salad), but in the meantime, I settled on something equally intriguing in name, a Frikadelle Slap Chip Roll.  A frikadelle is a spicy, flat South African meatball (beef, in this case). The name apparently comes from a similar German or Danish meatball, but a Malaysian friend, claims the South African frikadelle was inspired by Malaysian-Indonesian bergedil; given the multiple cultural influences on South African cuisine, that's entirely possible. The frikadelle roll uses a banh mi-like baguette, stuffed with the meatballs, french fries (or "slap chips") all coated with a thick curry. Think of it as banh mi meets Bombay meets Primante Brothers. As is obvious from the picture at the left, it's a messy affair, so grab lots of napkins. According to Amawele's menu, the frikadelle roll contains "South African meatballs stuffed with mint, onions, basil, green peppers flavored with fennel, lavender basil and thyme served in a bread roll with grilled onions and vinegar french fries (Slap Chips)" It's not entirely clear which condiment is in the meatball and which is in the sauce, but the bottom line is that my very filling frikadelle roll was frikkin' delicious.

"Amawele" is the Zulu word for twins, and Pamela and Wendy Michaelson who run the place, helped out (or perhaps shown the way) by their mother, are in fact, twins. The establishment recently moved to Rincon Center after a brief existence at an obscure Ninth and Noriega location and, judging from the lines and instant fan club they've generated, it was a wise move. In addition to the Bunny Chow and the Frikadelle Roll, Amawele's menu includes Cape Malay Curry rice, Durban Curry Roti Wraps , and Vetkoek, a deep-fried donut-like roll sliced and stuffed with (you guessed it) chicken curry. All items come with vegetarian counterparts. Based on my experience today, I'll be returning to try them all.