The menu at Village House is what I've come to recognize as typically eclectic Northern Chinese restaurant fare, with a slim stock of indigenous dishes augmented with a smattering of Shandong, Shanghainese, Xi'an, Sichuan and Xinjiang offerings.
Posted by Gary Soup at 10:23 PM No comments: 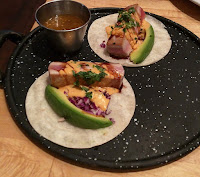