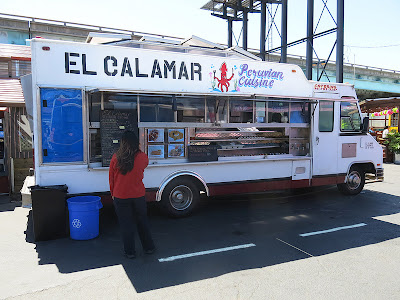 I'm not really planning a literal "Food Truck of the Month" feature. There may not be another Food Truck of the Month for another six months in this blog; then again there could conceivably be be two FTOMS in one month. The simple fact is that once in a while a food truck comes along that stands out so prominently that it deserves an honorific of sorts, so why NOT "Food Truck of the Month?" El Calamar Peruvian Cuisine, which started appearing frequently at the SoMa StrEat Food Park a month ago, is  just such a truck. 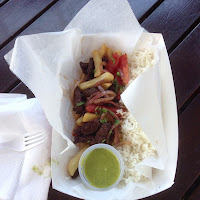 El Calamar is not a hipster creation of social media; as far as I can determine, El Calamar doesn't have a website, Facebook page or even a twitter account. It's a family operation, and you'll run into most of the family over the course of a couple of visits. The owner, chef and pater familias has great creds: he cooked at the Michelin-starred La Costanera Restaurant in Montara Beach.

El Calamar serves traditional Peruvian classics; there's no fusion or crossover foods on the menu. Yes, there's the familiar lomo saltado and papa a la Huancaina; but you'll also find less familiar platos, like carapulca, a stew of chicken, pork and dried potatoes in a peanut sauce, and jalea, a mixed grill of sorts featuring (mostly) fried calamari, grilled fish, shrimp and yuka.  Calamar means calamari, of course, and you can also get a standalone order of fried calamari or, also in the fishy deparment, grilled tilapia.  The current menu also includes papa rellena, and a Peruvian tamal. The refreshing Peruvian purple corn beverage chicha morada is also offered, and alfajor cookies for dessert. 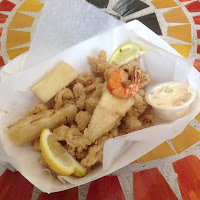 So far, I've tried the lomo saltado, carapulca, and jalea and enjoyed all three immensely.  I was particularly impressed with the fried calamari in the jalea, tender with a crunchy breading that had not even a soupçon of greasiness. I intend to work my way through the entire menu at El Calamar. I find myself checking SoMa StrEat Foods lunch roster on Twitter each morning, to decide if I need something at Costco, Rainbow Grocery or Best Buy; if El Calamar is scheduled to be at the Park, I do.

Another thing: if you are a chili head, ask for the hot sauce if it's not included.  You won't be disappointed. If you're not a chili head, approach that little tub of green stuff with caution. It's not guac!

Field Notes From a Fishy Fortnight: Rocking the Ceviche from Sanguchon and Shrimp & Love, and More

I last left you, dear reader, with the taste of Shrimp & Love's Shrimp-aguachile ceviche still on my lips and a desire for more in my gut. I didn't wait long, for the next night I found the Sanguchon truck serving ceviche alongside their Peruvian sanguches at Off the Grid: Fort Mason Center.  The Sanguchon truck is a side venture of the owner of a Michelin-starred Peruvian restaurant, and as might be expected, its ceviche comes exquisitely plated, er, styrofoamed. Sanguchon's ceviche is a classic Peruvian ceviche with the catch of the day (in this case red snapper) marinated in leche de tigre ("tiger's milk").  There are many recipes for leche de tigre; The Sanguchon truck's uses lemon juice, rocoto (a form of pepper) and ginger. It came accompanied by cancha (roasted corn kernels), choclo (fresh corn kernels) and camote (sweet potato). It is served "dry," i.e. with excess marinade drained off. In restaurants, the excess marinade is sometimes served in a small glass as an aperitif, "spiked" or not. 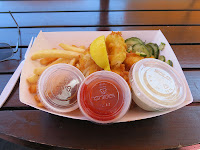 A few days later, I hit the SoMa StrEat Food Park for lunch, and the most attractive option at the time seemed to be Icelandic Cod Fish & Chips from Chef Pelle Nillson (he of the tunnsbrödsrulle) and his Nordic Truck. The nicely-breaded and perfectly-cooked cod came with French fries of just the right size (to my taste) though not quite as browned as I like; the latter didn't stop me from eating them all (which for me is a rare occurrence). The F&C was accompanied by a watercress remoulade (by way of a tartar sauce) and some fresh pickles. 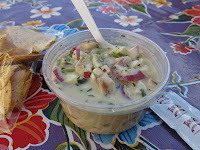 The following Thursday I returned to Mission Mercado, drawn as if by a magnet by Orlando and Monica's Shrimp & Love Ceviches, electing this time to try Orlando's version of Peruvian ceviche.  His is a much wetter version, with the fish (cubes of tilapia here) and accompaniments luxuriating in a well-drawn bath of leche de tigre. This version would hit the spot on a very hot day, thanks to the chilled "tiger's milk," though I preferred the spicier aguachile version I had the previous week. 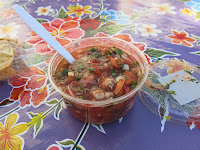 Thursday ceviche seems to be turning into a habit which I'll gladly submit to, at least until I've tried each of Shrimp & Love's ceviches, and it was no surprise to me that my feet found their way to the 22nd and Bartlett Mercado again yesterday. This time I gave the traditional Mexican ceviche a whirl.  Whole and cut shrimp were bathed in a tomato-ey, mildly spicy broth.  Like the other two Shrimp & Love ceviches I've tried to date, it's something I'll gladly return for.


As if the above weren't enough fish for a two week period, I also enjoyed a salt cod (among others, they're small) Sonora-style burrito from the Burr-eatery truck at SoMa StrEat Food Park, and some excellent takoyaki from a popup that only seems to appear on Post Street during Cherry Blossom Festival. 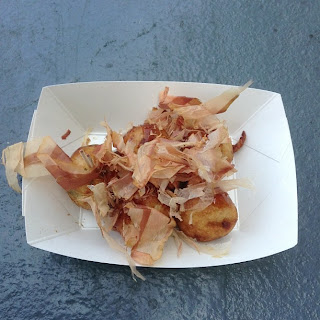 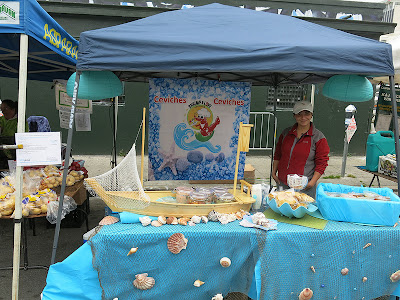 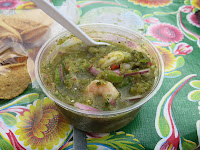 And the winner is.......ceviche!. There are two food groups that call my name, but LOUDLY, namely ceviche and lamb. I managed to work both into my grazing over the past few days (lamb more than once), but the fishy one always trumps the barnyard-y one, and it was Shrimp & Love that held the winning card. I ran across this vendor at Mission Mercado, which I visited for the first time today (what have I been doing all these Thursdays???).  Mission Mercado is a neighborhood "farmer's" market for the Mission with many familiar produce and value-added vendors, but has more of a community "street market" feel than other neighborhood farmer's markets are able to achieve. Shrimp & Love is the brother-sister team of Orlando and Monica Trigueros, who have developed a whole range of ceviches from traditional to fanciful (think passion fruit). Their ceviches are prepared off-site and sold in chilled, sealed packages (probably a DOH stricture) but come with a spoon, napkin and a packet of restaurant-style tortilla chips, ready for wolfing down at one of the convenient nearby tables. I chose the "Shrimp-aquachile" ceviche, a Mexican style. As the name implies, it comes with a very soupy sauce, packed with fiery green chiles, slivered onions and plenty of shrimp (I think I counted seven).  Needless to say, I immediately hunkered down and devoured the plastic bucketful of jalapeno heaven. I'll definitely be back for more, and to try the other ceviche varieties on offer. 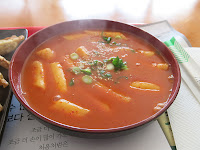 Ddukbokki (as fun to eat as it is to spell out) from Aria Korean-American Snack Bar was a close second in this heat as a spicy treat. Aria is a mom-and-pop hole-in-the-wall that opened about a year ago in the space that held the venerable Old Chelsea Fish and Chips shop for nearly 50 years.  Every time I've walked by it I have vowed to try the ddukbokki, dowel-shaped rice pasta similar to Shanghainese nian gao, served in a spicy sauce, and finally got around to to it last Friday afternoon.  I had only had one previous ddukbokki experience, on the streets of Shanghai, of all places and it was disappointing. The  pasta was under-cooked  and the sauce tasted mostly of catsup and was only slightly spicy). The Koreans had do do it better. I ordered the ddukbokki and an order of fried mandoo, the Korean version of jiaozi/gyoza. I wasn't disappointed.  The ddukbokki had great body, firm and chewy, but not jaw-cramplingly so.  They came in a savory soup-like bath in a shallow dish. The sauce was honestly spicy and so good one could slurp it as soup, which I did, until the chili heat got to be too much. The ddukboikki at Aria definitely belongs in the comfort food department, especially if a moderate spiciness is in your comfort zone. 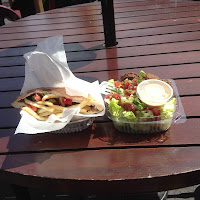 Another treat worth a repeat came from La Falafel. a food truck I found at the SoMa StrEat Food Park one lunchtime this week. La Falafel features (d'oh) falafel sandwiches, grilled chicken sandwiches and beef-lamb kabab sandwiches (all in pita bread) as well as a side Israeli salad. I chose a half-sandwich with the kababs (you did hear lamb, didn't you?) and an Israeli salad. This choice was easy to make because the salad came with three falafel balls, giving me a chance to sample their signature product while indulging my lamb thrall. \The salad was mostly tomato and cucumber, bathed in a nicely peppery vinaigrette, and the accompanying falafel balls were perfectly spiced and moist, making me promise myself I would go for a whole falafel sandwich next time. The kabab sandwich was also exceptional, with fresh pita, nicely spiced meats, and a topping that included freshly cooked french fries (which I believe qualifies it as "Israeli style"). 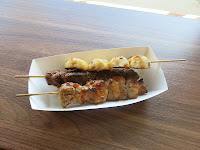 Last (and least, to be honest) was a stop at Sticks BBQ, whose shtick is skewers of grilled meats and other things. They feature approximately 15 types of skewers, listed on a chalkboard, and little else. I chose lamb shoulder, chicken thigh, and cuttlefish balls to sample. The lamb was nicely spiced and grilled, but a little on the tough side. It would have worked better with a fattier cut, longer grilling or tenderizing (hopefully through marination or some other natural process).  The chicken skewers were the best of the three, being tender and juicy in addition to being nicely spiced and grilled, and the cuttlefish were about as good as cuttlefish balls can be. I have no real complaints, but they weren't anything to make ones pulse race. The small skewers were not overly expensive, not were they great bargains.  In a nutshell, the product seemed middling in every way.  Sticks is located in the midst of a highly competitive after-school snack ghetto (I counted ten places to get bubble tea in that three-block stretch of Irving St.), and unless they have a secret boba formula or something, I don't see Sticks as, well, sticking.