Remembering the Basque Hotel Restaurant, and Basque Food Culture in the Bay Area 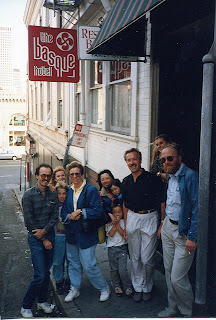 Basque restaurants, particularly the ones attached to Basque boarding houses in San Francisco in the mid-20th Century played  a big role in keeping body and soul together in my salad days of the early 1960's. The Basque Hotel Restaurant at 15 Romolo Place (there's a hipster bar there now) was my favorite. It was one of the later vintage Basque hotels, but actually functioned as a boarding house for sojourning Basques and, at least in its early years, adhered to a very traditional French Basque dinner service.  You'd walk in before its single 6:30 seating and sit at a long communal table.  At 6:30 sharp food would start coming, and you'd start eating. They would start with soup, followed by two entrees (which varied by day of the week), passed down the table on huge platters. Entrees might include clams, lamb chops, coq au vin, even sweetbreads.There were invariably mountains of French fries, the best I'd ever had.  Sourdough bread (probably from Larraburu Bakery, which existed until the late '70s despite the erroneous info in the chart below), served without butter. Salad would be served last, European style. There was also unlimited quantities of vin ordinaire, and at the end of the meal strong coffee would be served, poured into the same tumbler you drank the wine from.  I've never been a dessert guy, but there may have been pie or ice cream, too.  At the end of the meal one would walk to the back or the room, pay at the bar and exit.  I don't recall the exact price, but it was a splurge, at least double the $1.00 I would pay for a full American-style dinner at Jackson Cafe or Sun Tai Sam Yuen on Jackson street.

Not long into my tenure some traditions yielded to practical considerations, such as the pay-on-exit (which required a detour which was too easily avoided) and, eventually, the unlimited free wine. Prices rose faster than the cost of living as well, but it was still an affordable feast and a great social outing in the '80s when the above photo was taken (that's yours truly with the cig). .

I found the chart below on docstock.com. It's presented as is, though there are some errors and out-of-date information in it (Iluna Basque, for one thing, has closed).

Basque Hotels and Restaurants
In The Area

As part of some research I'm doing (related to Chinese restaurant chronology in San Francisco) I've been poring over restaurant listings in old City Directories placed online by the SF Genealogy website. The 1962 directory is particularly interesting to me because it's the year I landed in San Francisco and had my first contacts with the local food culture.  Since this time period also happens to be exactly 50 years ago, this information might also be of nostalgia value to others.  Clicking on the file names of the images below will bring up large, readable images of the directory listings from my Flickr account; clicking on "pdf" will take you to the original page on the Internet where I found them.  If there's any interest in these shortcuts I may do something similar for other selected years.