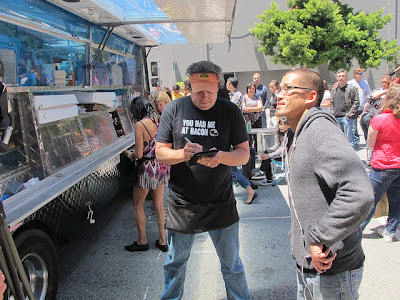 Considering the bacon-everything madness of the past couple of years, it's hard to believe that until today we were more than a year into Food Trucks 2.0 without a single bacon-interest truck on the street in San Francisco. That all ended with the official Launch of the Bacon Bacon Truck (@baconbaconsf) at 63 Bluxome St., where it'll be found Tuesday through Thursday, at least this week.
I decided to check out this historic day in the annals of bacon on my way to Costco.  The truck's location in an arty alley (a winery, a silk screen print shop and a couple of galleries are among its neighbors) a short block from Caltrain and the #30/45 bus stop made this easy.  I intended to just be a Looky Lou and take a couple of pictures and be on my way.  I do like bacon, though, common sense and cardiology aside, and fell prey to the phenomenon known as Bacon Hypnosis which is triggered by the fumes of cooking bacon.  I was hooked. Perusing the menu, which consisted of various appropriate uses of bacon, I selected a sandwich with the the very San Francisco name of the LGBT* as likely to cause the least damage to my arteries.
"It'll be about 20 minutes," said the Bacon Pusher in an apologetic tone.
"No problem," I said "I'm retired.  I've got all day." 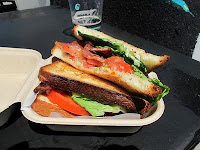 The words were almost prophetic. My 20 minutes turned into 30, then 40 and eventually to more than an hour's wait for my sandwich.  I wasn't alone;  there were a couple of dozen other people in the same waiting mode. The Bacon Bacon staff were repeatedly apologetic, and continually supplied samples of fries, bacon jam and root beer. There was only so much room for a griddle on the truck, they explained, and only so many strips of bacon could fit on it at once. The demand had simply outraced the supply.  Maybe it was the pleasant, sunny 70° weather or the hypnotic effect of the bacon fumes, but the waiting crowd was remarkably patient and cheerful, and each new order off the grill was given a celebratory greeting.
For  the record, my sandwich was beautifully prepared, and the slices of thick bacon perfectly cooked, crisp but not burnt, and very, well, bacony.  It was a good sandwich, and worth $7.00, considering the market.  But was it worth more than an hour's wait?
From the Bacon Bacon Truck operators' point of view, I'm sure the problem of dealing with too much demand, rather than too little, is one they'll gladly take back to the drawing board.