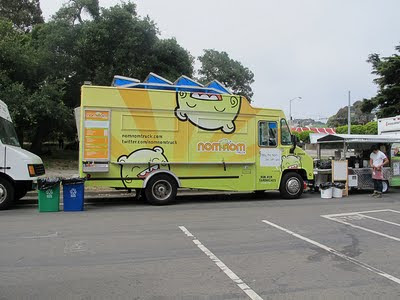 Two much-anticipated food trucks with doppelganger names made their Off the Grid debuts at the Upper Haight event tonight.  The Nom Nom Truck (which should perhaps be called Nom Nom North)  was making its San Francisco debut as well, and the Bacon Bacon Truck, whose San Francisco Debut occurred a week ago, was finally ready for prime time.

The Nom Nom Truck is a spin-off of a Los Angeles truck of the same name and features banh mi. It comes to us with a certain amount of TV celebrity, some polished marketing, an apparent fan club and T-shirts. The Bacon Bacon Truck, which I encountered previously, features bacon and, well, more bacon. It taps an amorphous but huge bacon fan club and, yes, has T-shirts.

Nom Nom's menu features banh mi in four flavors: Grilled Pork, Lemon Grass Chicken, Vegetarian Tofu and a "Deli Special" (which I forgot to inquire into).  If you don't know what a banh mi is, I'm surprised you are reading this blog, but the Nom Nom folks have thoughtfully posted a tutorial on their truck. The sandwiches are a foot long and $7.00.  If you are looking for smaller bites, they serve taco versions of all the fillings except the Deli Special, for $2.50.

I decided to go for a banh mi, and they had me at pork. My sandwich had a generous quantity of the pork, nicely grilled, and the vegetable matter was fresh and thinly sliced.  If I could find fault with anything, it would be that the saucing and spicing could have been more sprightly.  The star of the banh mi was, if anything, the long, thin baguette, so nicely crispy on the outside and soft on the inside.  Nom Nom's banh mi probably won't make you forget the sharper flavors (or the lower pricing) of Saigon Sandwich, but hey, you are at Off the Grid.

Nom Nom.  Bacon Bacon. Bottom line: which to choose from?  It's really apples and oranges, but if I absolutely had to choose, it would be Nom Nom for the sandwich, but Bacon Bacon for the T-shirt.