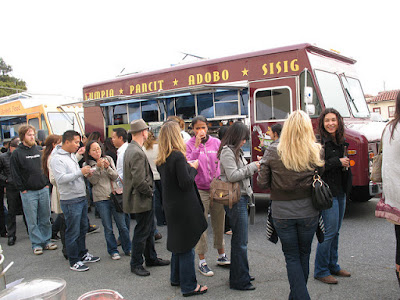 Filipino food don't get no respect.  Consider this: there are 324,000 Filipinos in the Bay Area and about 6,000 Thais.  Now ask yourself how many Filipino restaurants you know, and how many Thai restaurants. Filipino cuisine is tasty and varied.  Why should it only be available to Filipinos in the privacy of their own kitchens?

Thankfully, things are changing in San Francisco.  Non-Filipinos are starting to know sisig from Shinola. They now know silog is neither dog nor half-hatched chicken egg; it's as simple and comforting as a ham-and-egg plate, only with a choice of more or less familiar savory meats and deliciously garlicky rice instead of hash browns.

Much of the credit for "outing" Filipino food and bringing it to the larger Bay Area population goes to the contemporary food truck movement.  I once joked to the organizers of Off the Grid that they had set a World Record for the number of Filipino food trucks in one place with THREE: HapaSF, Señor Sisig, and the WOW Silog truck. The Adobo Hobo and the Lumpia Cart, among others, may also grace OTG and other street food gatherings with their presence.

Leading the charge to respectability for Filipino - dare I say it - cuisine is none other than the HapaSF truck featured in the Eat Street video above.  Maybe it helps that William Pilz, owner-chef, is only half-Filipino (hence the Hapa); that his reputation for cooking skills and presentation preceded him from a noted non-ethnic restaurant; or that he favors designer ingredients. Make no mistake, though, what he pushes is Filipino food -- it's not Korean tacos or North Indian burritos, tasty as those fusions are.  His sisig over rice is one of the top bites of any street food gathering in Northern California. and his "Shanghai" lumpia are as wickedly good as any I've had - greasy in just the right way. 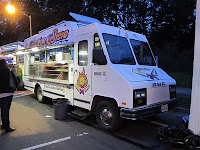 Not to be overlooked are the Señor Sisig Truck and the WOW Silog truck.  While HapaSF won a critics' award in a recent local food truck rating, Señor Sisig won a readers' choice award, and the lines at SS truck for its more down-to-earth offerings testify to its appeal to Filipino food newbies as well as veterans.  And if you are too hungry for grazing and looking for a full meal from a single food truck, you can't go wrong with a longsilog, tapsilog or a spamsilog from the WOW truck.

Email ThisBlogThis!Share to TwitterShare to FacebookShare to Pinterest
Labels: Off the Grid, Street Food, William Pilz