Azalina Eusope, proprietor and chef at Azalina's Malaysian, will be opening her first brick-and-mortar space in the restaurant/market complex being developed on the first floor of the historic Market Square building on Market Street between Ninth and 10th Streets. The building is popularly known as the Twitter Building after its primary tenant.  For a descendant of five generations of Penang, Malaysia street food vendors, she'll be in pretty good company; her restaurant is being developed alongside projects by Dominique Crenn and the AQ team in the midst of what can be envisioned as a mashup of the Ferry Building Marketplace and Eataly.

In addition to providing tasty snacks at street food and food festival events, Azalina has had plenty of chances to show off her cooking chops in more formal settings, including a series of popups at Wise Sons Deli, a Monday night guest chef stint at Jardiniere, extensive catering, and cheffing at Twitter. The latter was undoubtedly a primary factor in her being offered the space.

By happy coincidence, Azalina will be working across the street from Suvir Saran. The two met through Suvir's participation over the years in food entrepreneur conferences at La Cocina (of whose incubator kitchen Azalina is an alumnus) and have become close friends. Saran, an India-born New York Michelin-starred chef (for Devi) will be relocating to SF and opening a restaurant in  the NEMA building across 10th Street from the Twitter building.

No specific opening date has been set, but September is a target for the Market Square restaurant openings.

I've known Azalina since her first appearance at Off the Grid in 2010.  She is at once one of the most personable and hardest working people I have ever known and I have no doubt she will succeed.

San Francisco is blessed with Burmese food choices, more so than any other city in North America, and perhaps the entire English-speaking world.  Below is a list of 10 places to try Burmese food. All have Burma's most well-known "exotic" dish, fermented tea leaf salad, and all except B-Star Bar and the pop-up at Jonas on Hyde have Mohinga, the catfish chowder considered Burma's national dish. Except where noted, all are open for both lunch and dinner.

I cheated a little with Little Yangon; it's technically in Daly City, but I included it because it's accessible via Muni (#14 lines).

1Burmese and Thai; open for dinner only
2Asian fusion, with some popular dishes from sister restaurant Burma Superstar
3Lunch only; order from "Made To Order" menu, NOT from steam table
4Burmese Pop-up with limited menu, Tues-Sat dinner only
5Food cart, permanently stationed at SoMa StrEat Food Park
Posted by Gary Soup at 11:32 AM No comments:

A Burmese Food Pop-Up Hyde-ing In Plain Sight In My Own 'Hood At Jonas On Hyde.


I've been chasing Burmese cuisine all over town for the past year or so, partly because for my other blog I'm working on an overview of all the mohingas* in town, and because I'm becoming increasingly interested in Burmese food generally. I thought I knew all of the Burmese food sources in town, until an off-hand mention on chowhound.com of a Yelp reference to unspecified Burmese pop-up sent me searching the web. My jaw dropped when I found out the the venue was a sandwich shop called Jonas on Hyde, in my own neighborhood, and the pop-up has been happening for at least four months.

Jonas on Hyde, on the corner of Hyde and Vallejo, serves bagelly breakfasts and ecstatically-reviewed paninis for lunch seven days a week.  On Tuesday through Saturday evenings from 5:00 to 9:00 PM a friend of the owner's, an earnest and friendly young man named Ken, takes over and prepares Burmese food for eat in or take out.

At Ken's suggestion, I ordered the Samusas, and, being a noodle guy, the "Flat Noodles" (Chicken Noodles).  They are prepared in "to go containers" but apparently may be eaten on-site, according to accounts on Yelp.  I wavered, but decided to take them home, only a ten-minute walk, all the better to photograph, dissect and analyze them away from Ken's watchful gaze (I was the only customer in the store at that point). 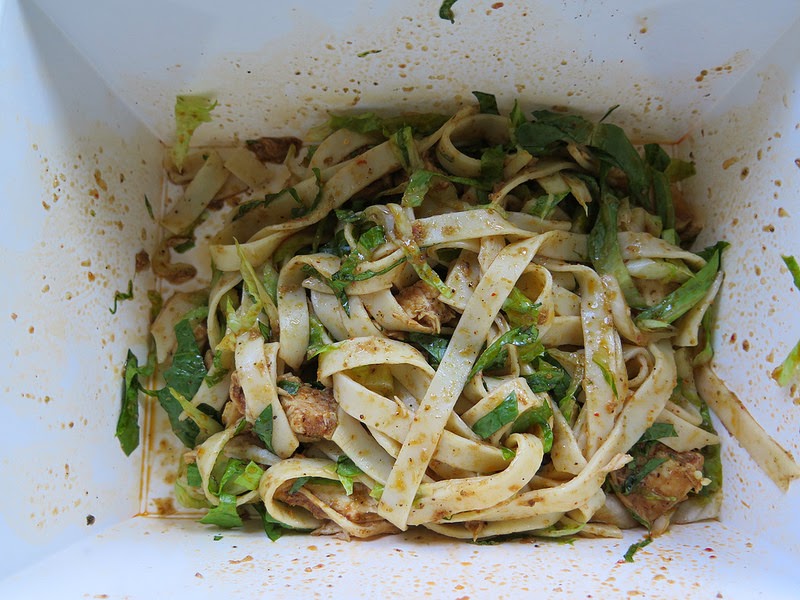 The samosas (or samusas, as the Burmese usually call them) were the winner of the two dishes. They were deep fried and nicely crispy (even after their ten-minute walk and five-minute photo session) with a spicy potato filling and a chili-garlic-lime dipping sauce.  The chicken noodles were probably what the Burmese would call Nanbyagyi thoke (to use Wikipedia's romanization). There was a hearty amount of chicken (which appeared to be grilled) and tagliatelle-style wheat noodles. Cilantro and what may have been lime leaves, crushed chili and garlic were among the ingredients in the fish-sauce based dressing. (I regret not having eaten in to ask about the ingredients, as I am not a super-taster). Overall, it was a hearty and tasty noodle dish, but not much out of the ordinary.

I'll certainly return to check out the curries and the ginger salad. The tea leaf salad, if authentic, is not something my insomnia wants me to eat in the evenings.

And Ken has promised me a Mohinga. 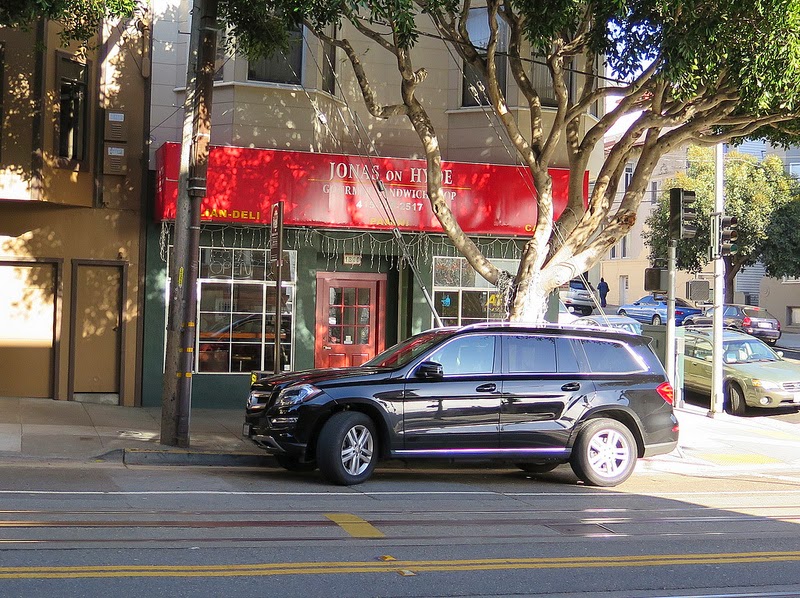 *A catfish chowder, regarded as Burma's National dish.
Posted by Gary Soup at 9:44 PM No comments:

Off the Grid: Fort Mason Center 2014 Edition -- Back to the Future?


Off the Grid: Fort Mason Center is both the granddaddy and the Big Kahuna of Bay Area food truck rallies.  About to enter its fifth year, OTG:FMC serves up 30-odd mobile food vendors and plenty of booze to enliven Friday nights for thousands of people from March to November. Season openers (this year's will be on March 14) have become much-anticipated events.

At the outset of the 2013 season, I was somewhat dismayed by the direction the event seemed to be heading. In part, it was due to the introduction of elitist events, like the segregated $40-$50 pp prix fixe "VIP" dining area with its exclusive "curated" cocktail "experience," but more of my displeasure was triggered by the changes in the roster of vendors, which seemed little short of ethnic cleansing -- a net loss of 10 out of 24 Asian or Latin food vendors from 2012 to 2013, even though the event's charter calls for promoting Asian and Latin street foods.

The 2014 Off the Grid: Fort Mason Center cat is out of the bag and, based on this Inside Scoop report, I'm happy to say that the event seems to have reversed direction, at least partially, back to its more proletarian roots.  Gone are the "VIP" events, and this has provided more room for vendors, which is back to the 2012 level of 35 (though it's not clear how much rotation of vendors is involved). An analysis of lineup changes reveals that, while not back to 2012 levels, there has been a net increase of four Asian and Latino vendors from last year. There's also more of a Euro flavor this year, with France Delice's excellent home-made sausages (and peerless frites), a paella vendor and even a red sauce meatball vendor. 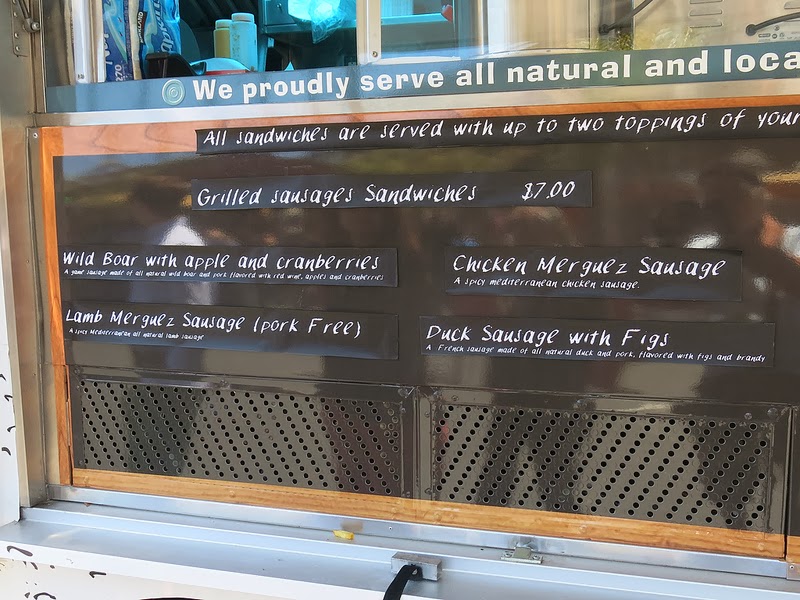 Some of the roster losses from last year are surprising, especially OG Off the Grid vendor HapaSF (let's hope William Pilz is busy with irons in other fires). Also missing is Onigilly (certifiably busy elsewhere), and Chotto Ramen is also a goner. New additions in the Asian food department are An the Go (actually returning from 2012); Happy Dumplings (ditto): The Jeepney Guy (Filipino fusion) and Raj Singh (Indian food). New-to-Fort Mason Latin vendors are Burr-Eatery, El Pipila, and Nora Cocina Espanola (Spanish, rather than Latin American, and a paella specialist).

Other departures from 2013 are Belly Burgers, Fins on the Hoof, the Old World Food Truck, Pete's Kettle Corn, Side Pony, Sticks, and The Whole Beast.  Newly inserted in the OTG:FMC starting lineup are local favorites Bacon Bacon, FiveTen Burger and Casey's Pizza. And there will be donuts.

Along with bread you get circuses, of course, so the will be Skeeball (wonder where they got that ides?), shuffleboard and Whack-a-Mole. Talk about your curated experiences! 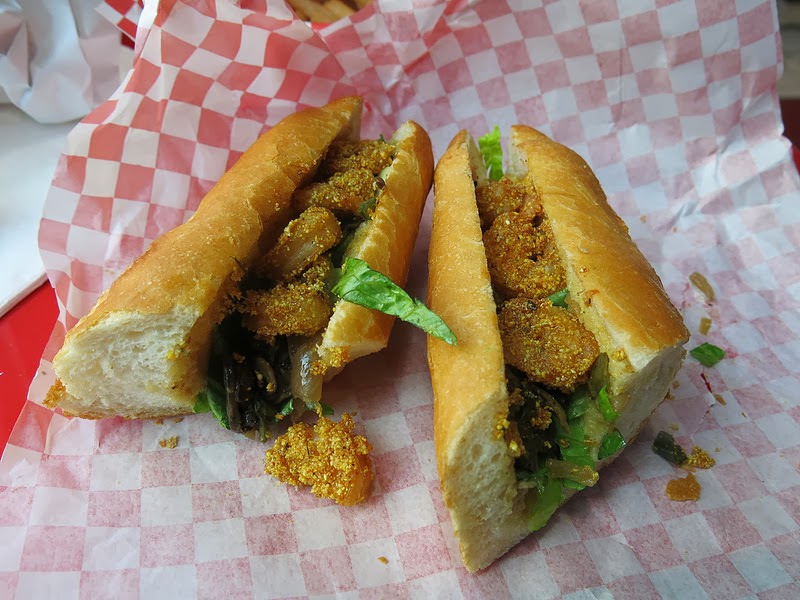 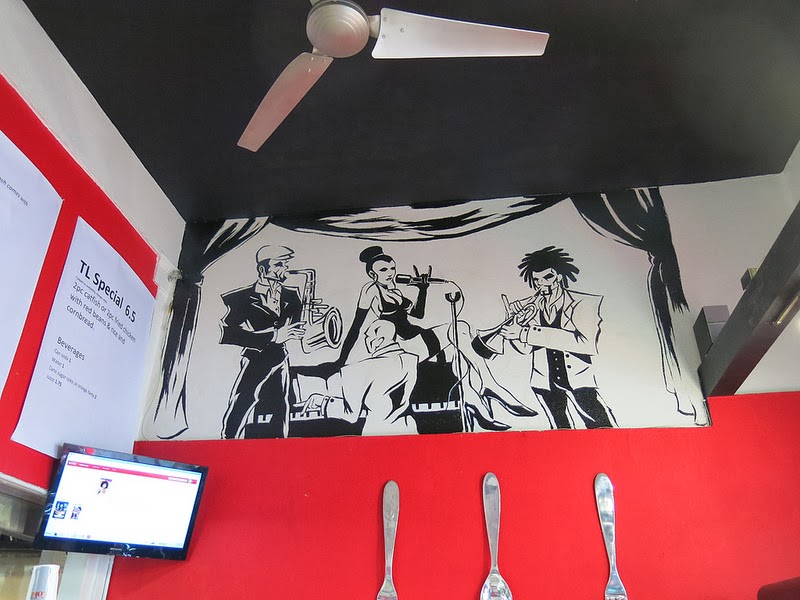 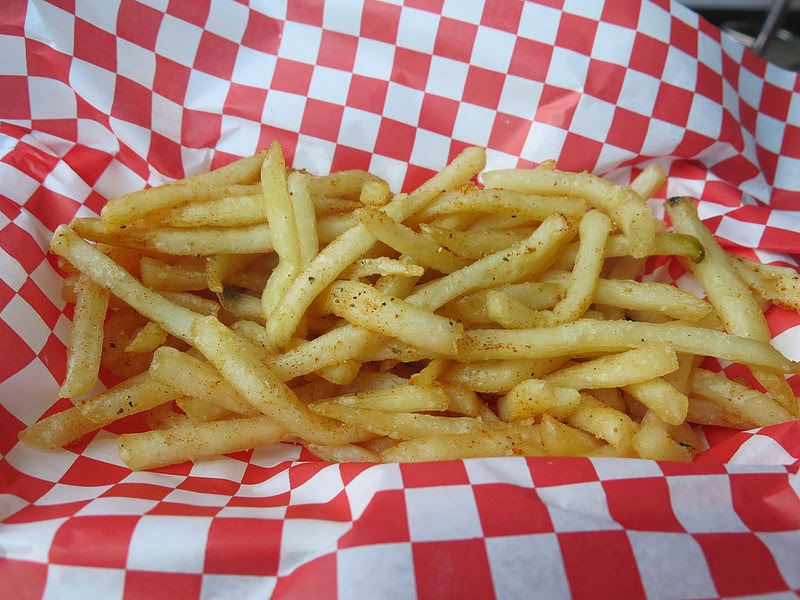 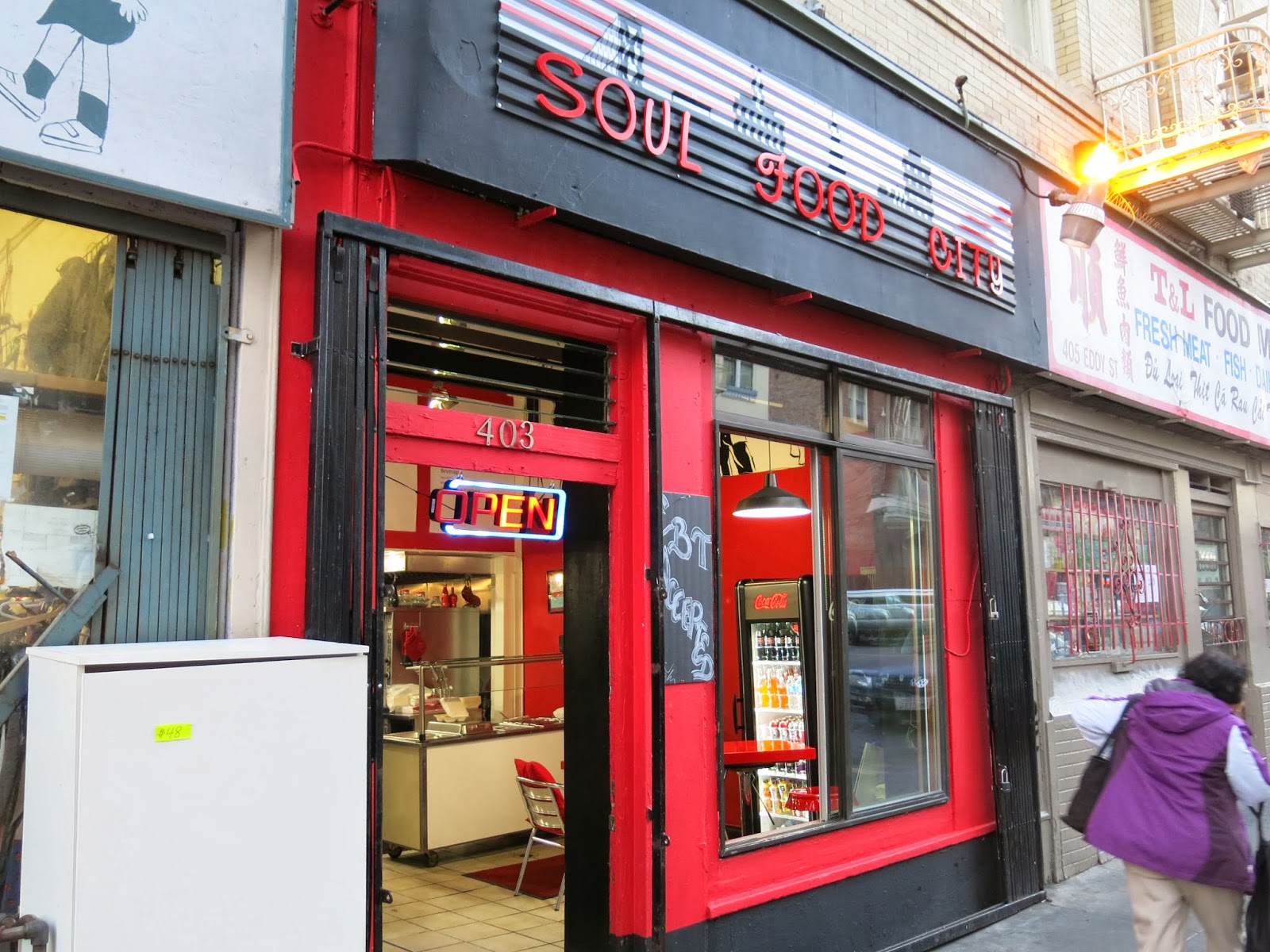