Why Jonathan Gold is My New Best Friend 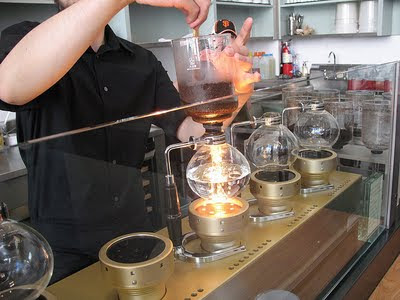 Jonathan Gold, Pulitzer Prize-winning L.A.-based food writer is my new best friend, and no, it's not because he once used my photo of San Francisco's finest xiao long bao to illustrate his near-viral piece On the Great San Gabriel Dumpling Assault. It's because of a more recent piece, written for Sunset Magazine, on the 10 Worst Food Trends.

As nearly anyone who's been within earshot of me for the last few years knows, I flat-out loathe the product of the Great Hipstafarian Cultural Revolution (GHCR) known as "Third-wave coffee." I've been drinking coffee for nearly 60 years, and developed my palate for coffee in the real hearth of west coast coffee culture, North Beach. North Beach is where coffee really tastes like coffee, where coffee roasters like Graffeo, Trieste and Roma really know how to roast coffee, and espresso drinks are really made by people fresh off the boat from a place where "barista" is a real word. You will never get the thin, sour otter water humorously called coffee in the latest trendy SOMA or Park Slope joint.

The GHCR's cultural suasion is pervasive and front-runners are many in contemporary San Francisco, and I had started to feel like my protestations against the state of coffee culture were cries in the wilderness. Then, some divine hand pointed to these words in the aforementioned Sunset article by the wise Mr. Gold:

9. Third-wave coffee: Do we applaud fair-trade, sustainable farmed, shade-grown joe? Sure. Why not? But when we sit down to a cup of coffee in the morning, we are not particularly interested in the blueberry, caramel, or tomato soup nuances a dedicated roaster can coax out of a bean, nor in the intricate ballet of the four-minute pour-over or the Eva Solo flagon. We want coffee that tastes like coffee, and we want it now.

Off the Grid Celebrates First Anniversary 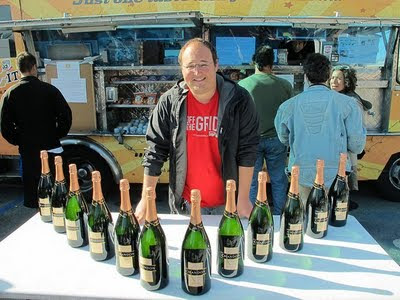 It was just a year ago today that Matt Cohen's SF Carts Project, in collaboration with La Cocina, launched a brave experiment -- Off the Grid at Fort Mason Center, a weekly gathering of curated food trucks and food stalls. To use the old cliche, the rest is history. Off the Grid at Fort Mason Center has tripled in size (both in its footprint and number of vendors) and has branched out across the city to five new locations, offering one or more events six days a week. It recently launched a highly successful weekly Berkeley event, and Marin and San Mateo openings are just around the corner. Cohen got into the business of being a street food "facilitator" after futilely battling the bureaucratic machine on behalf of his own food truck dream, and now finds public agencies and civic groups beseeching him for a little OTG street food love on their turf. How sweet that must taste. 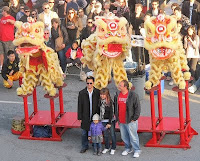 stalwarts, the IZ IT Fresh Grill truck. Through their connections to the San Francisco Chinese community a spectacular performance by a championship team of lion dancers was secured for the event. It was also in front if the IZ IT Fresh truck that the flying wedge of Chandon in the picture above appeared. I didn't stick around long enough to see what happened to all that bubbly, but I'm guessing it wasn't poured on anyone's head.

Mazel tov and 恭喜恭喜 to Off the Grid and the IZ IT Fresh truck! 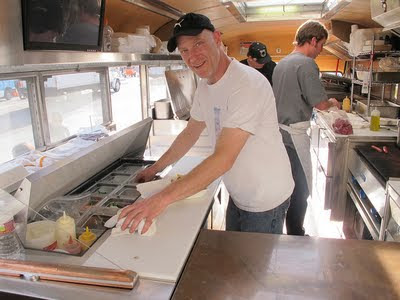 Hugh Schick, Executive Chef and one of the brains behind the le truc “bustaurant” (which brought on-board food truck dining to the Bay Area) loves good beer. In his Off the Grid:Fort Mason Center debut, he ragged on Matt Cohen for not providing decent beer at the event bar. It's probably a coincidence, but Off the Grid:Fort Mason Center 2.0 now features a separate craft beer bar. But Schick, who’s largely absent from le truc's 4th and Brannan home these days (it’s rumored that he’s being squeezed out by the truck's investors for not being sufficiently housebroken) wants to take the pairing of haute truck food with craft beer a giant step further. A genial obsessive that the late Warren Oates would have liked to play on screen, he’s developing a craft beer truck (“the brewtruc”) that will legally serve the finest new local microbrewery products on board at food truck events, and even in transit.

Working with an old yellow school bus (which le truc also started life as), he’s planning a clubby interior with 6 taps, leather seating, and lots of hardwood, brass, copper, and plants, but no kitchen. He’s promising collaborative and small-batch beers from the area's hottest nanobreweries (Pacific Brewing Lab, Elizabeth Street, etc.) along with bigger names like Dogfish Head and Lagunitas, and perhaps even favorite Muddy Puddle. How has he handled the legal niceties? He’ll be operating under a limousine license, and you will have to secure a reservation before boarding and enjoying his offerings. He’s hoping to smooth the process using an on-line agent for last-minute reservations, should you spot the truck and develop a sudden thirst.

I can hear the muttered "rompi coglioni" as I type this. 50 types of Italian coffee: espresso, cappuccino and many more
Posted by Gary Soup at 8:13 AM No comments: 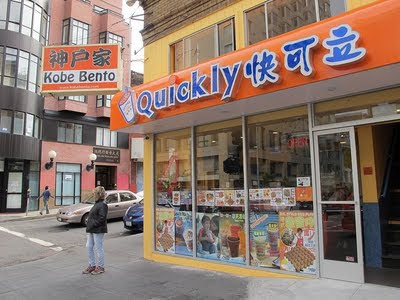 A bed check today of the 600 block of Kearny Street in San Francisco's Chinatown revealed some recent and imminent changes to this street's always solid and variegated roster of Chinese eats. Most spectacular, at least in a visual sense, was the appearance of Kobe Bento by Quickly in the

space most recently occupied by Ton Yong Thai on the Northwest corner of Kearny and Jackson. This location, which I first knew as Meilong Village, seems to change hands every year or two, but judging by the activity there Kobe Bento may be around for a while. The strategic positioning of Kobe Bento across the street from the soon-to-open City College campus was probably a consideration to Quickly. (According to Trademarkia, Kobe Bento is a registered trademark of Quickly, the Taiwanese bubble tea chain.} Along with the usual boba house suspects, the comestibles here include takoyaki (8 pieces for $4.95), something I'll have to try, at least once. 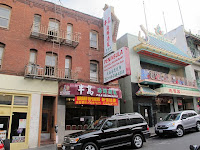 Further up the street, and further up the scale of gourmetise, the moribund Pearl City Seafood (641 Jackson) recently reinvented itself as Peninsula Seafood. At least that's what the big new hanging sign calls it. On the awning it's also called P&R Seafood; maybe they are inspired by the success of Z&Y two doors away. It's unclear whether the restaurant is under new management or has only received a makeover; ABC records still list Pearl City as the owner of the liquor license. The new signage also promises Hong Kong style dim sum; that was a staple of Pearl City.

Last and least (in size, anyway), the 605 Jackson space vacated several years ago by the tiny Star 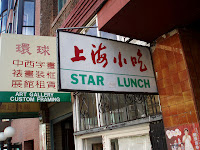 Lunch, of stinky tofu fame, is finally getting some attention. The Star Lunch/上海小吃 sign (which I've long coveted) has finally been removed and a ladder was newly visible above the papering in the window. The space was big enough for only a counter and a solitary two-top; here's hoping it will become the humble noodle or dumpling bar I've fantasized about putting there myself.
Posted by Gary Soup at 7:33 PM No comments: 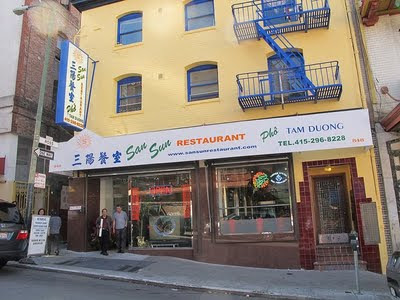 I've been opposed to the Central Subway (a.k.a. Chinatown Subway) project from the outset. It just seems like too much expense and too much disruption for too long a time to effect a five minute improvement in travel time from Third and Market to Chinatown. Fortunately, the impact on Chinatown will apparently be limited to the taking of one building for the Chinatown Station site, but what a building it is, housing four budget-priced restaurants and one purveyor of house-made sausage and cured meats. These are You's Dim Sum, Little Paris Restaurant, San Sun Restaurant and Joy Hing BBQ Noodles on Stockton Street, and Wycen Meats arount the corner on Washington Street.

The first shoe to fall was the move, last weekend, of San Sun (a.k.a. Tam Duong) Restaurant to larger new quarters on Washington Street. San Sun is a popular Vietnamese-Fukienese-Chaozhouese-Malaysian mashup with a prodigious noodle menu. According to my Chinatown source, San Sun received $250,000 in relocation assistance from the City, but spent ten times that to buy and renovate the building at 848 Washington St. which formerly housed the Great Oriental Restaurant. Fortunately, it's twice the size of the old San Sun, because they'll need to sell a lot of noodles to pay for the upgrade.

As for the other restaurants on the block, Little Paris will probably be the most missed, being 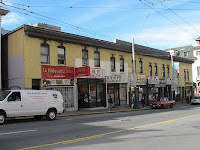 unique in providing Vietnamese "bento" box carryouts in addition to serving creditable pho and banh mi. My contact opined that it probably will not be replaced, as the owners were already on the verge of retirement, and there is already a family-run branch of Little Paris on Clement St. You's Dim Sun also has another, more popular branch in Chinatown (on Broadway). My friend had no clue as to the fate of Joy Hing BBQ Noodle House.

Mentioned: @Central_Subway
Posted by Gary Soup at 11:24 AM No comments:

World Business Channel report on Off the Grid

I'm a big fan of Off the Grid and its people, subjects that will most likely come up often in this blog. For starters, this video is the best overview I've see so far on the who, what, and why of OtG. It focuses on the mothership Fort Mason Center venue, where I can usually be found on Friday nights 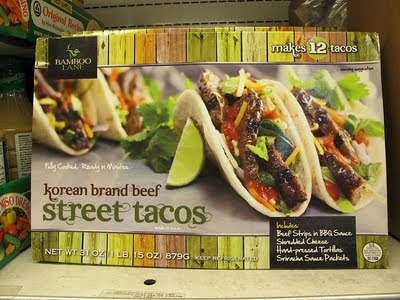 Hang it up, Seoul on Wheels. Rethink your business plan, Kogi BBQ. Don't quit your day jobs, TaKorean. And you guys in Amsterdam at Korean Taco Party, you might want to expand your menu, maybe add some funny brownies. The sun is setting on Korean taco trucks; a company called Bamboo Lane has come up with a kit for us Korean taco lovers to nuke and assemble Korean tacos, in the comfort of our own kitchens for about a buck a taco. And it's right there, now, in the refrigerated gourmet prepared foods section of your local Costco, at least in ahead-of-the-curve San Francisco.

"No more waiting in lines behind the masses following the taco truck craze," says the copy on the back of the Bamboo Lane Korean Brand Beef Street Tacos box. "Bamboo Lane has delivered the sensation of Korean style beef tacos to your own kitchen. You can now prepare these delectable tacos by wrapping our succulent Korean BBQ beef strips with our hand pressed soft tortillas and adding shredded monterey jack and cheddar cheese. Make it your very own by adding cabbage, lettuce or cilantro or your favorite vegetables. To top it off and give it an additional kick, drizzle the taco with our mouth watering sriracha sauce. These tacos will make you go loco ('crazy') for more!"

I wasn't inclined to take one for the team on this one, the preparation being a little too complicated for me (having to nuke the meat and tortillas separately, etc.) but in fairness the Santos family in Hawaii took the plunge and liked what they came up with.