At San Mateo Caltrain Station, Off the Grid Explores a New Market 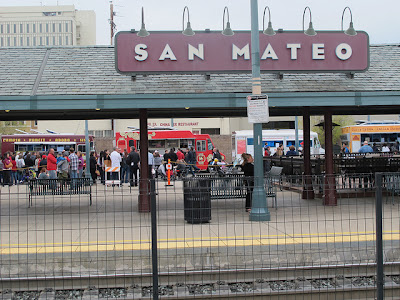 It’s not often I go beyond the City limits of San Francisco, but when Matt Cohen cajoled me to check out the launch of his new Off the Grid venue at the San Mateo Caltrain Station, I managed only a token demurral.  Not because of the two new vendors he promised, but because there was a wrinkle in his latest venture that intrigued me.  But more on that later.
The new Monday night Off the Grid venue, 5-9 PM at the San Mateo Caltrain “kiss-and-ride” lot, was created at the request of City of San Mateo planners. It is slated to serve up two platoons of eight different trucks each on alternate weeks.  At tonight’s soft launch only six trucks were present (including only one of the two promised new kids on the block) due to last-minute permitting snags. (It is expected to be at full strength next week.)  In addition to five trucks already familiar to Off the Grid fans, Whisk on Wheels, a truck serving Argentine Tapas and sandwiches, made its Off the Grid debut.
Ever eager to vet the new entrant to the field, I selected the “large tapas” option from Whisk on Wheels’ menu: a beef empanada accompanied by a side salad of baby greens with strawberries and reggianito.  The empanada was plump with savory beef and had a nice flaky crust, as good an empanada as I’ve had in a long time, and the salad was an exquisite mélange of flavors and textures. The combination of the two provided good value at $5.50.  I was pleased to learn that Whisk on Wheels will enter the rotation of San Francisco Off the Grid events, and look forward to trying their other offerings. 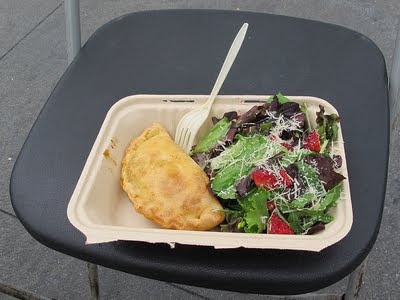 Now for the chalk talk. Why do I find this event of particular interest?  Forgive me if I get overly analytic, here (an occupational hazard of my previous life as an urban and transportation planner).
I like to think that there are two basic operating models for food tucks, or “street” food vendors generally.   The first model, which I would call the “catering” model, brings food to where the demand is.  The second model, which I think of as a night market, or “hawker center” model, creates a destination for people to gather, sample a variety of affordable food and socialize in their leisure time.  Off the Grid’s first venture, Fort Mason Center, is squarely in the mold of a hawker center, with people coming from far and wide in groups to enjoy a shared dining and drinking experience.  OTG’s other evening and weekend ventures to date (Upper Haight, Berkeley, and McCoppin Hub) also generally fall into this category. By contrast, Off the Grid venues at Civic Center, U.N. Plaza and Minna Street fit the catering model category, primarily serving as a lunch time option for people working in the immediate vicinity. 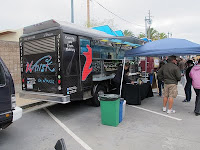 The Monday evening San Mateo event represents a new turn in the Off the Grid path.  By placing a collection of curated food trucks at a suburban transit station, they’ve expanded  into the realm of catering to workers at the home end of their commute.  This is a model which works very well (albeit on an ad hoc basis) in New York, for example, where some of the best collections of food truck and food cart vendors cluster around busy outlying MTA subway stations like 74th-Broadway in Jackson Heights and Junction Boulevard in Corona.  It’s also a stratagem I’ve seen increasingly applied in Shanghai as its metro system has developed. It will be interesting to see how it plays out at San Mateo Caltrain over time; observations tonight were of a significant number of a debarking Caltrain passengers joining the curiosity seekers and food truck fans already gathered at the event. The stratagem appears to provide  considerable expansion potential for the curated food truck field, given the dozens of outlying Caltrain and BART stations. This “commuter” catering model is also one that can be turned inside out, as it has in New York and Shanghai, with grab-and-go breakfast fare served in the morning at outlying metro stations, though there is no reason to believe that OTG staff have that in mind.
Mentioned: @SFwhisk
Posted by Gary Soup at 10:23 PM

Email ThisBlogThis!Share to TwitterShare to FacebookShare to Pinterest
Labels: Caltrain, Off the Grid, Street Food