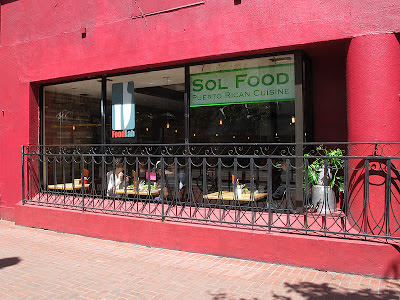 Thankfully, there are no mad scientists in white coats running around with test tubes at the SF FoodLab. It's not a crucible for molecular gastronomy, but rather a combination commissary kitchen and host space for pop-up restaurateurs. Located in the Renoir Hotel at 1106 Market Street in the space that once held Cafe do Brasil and most recently the valedictory run of Little Joe's ("rain or shine there's always a line"), it's a new project by Off the Grid's Matt Cohen and partners Gabriel Cole and Mark Walker. 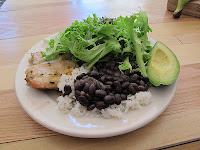 I attended the first public event at the SF FoodLab, a May 23 lunchtime pop-up appearance by San Rafael's Sol Food (it's pronounced Sōl Food, after proprietor Marisol Hernandez, hence a pun). Sol Food features Puerto Rican cuisine featuring free range and antibiotic-free meats and organic salad greens.  On opening day, the offerings were only a small subset of Sol Food's extensive San Rafael menu, with one chicken, one beef and one vegetarian "Combinacione" available. I chose the Pollo al Horno Combinacione, described on the menu as "Free Range/wheat free boneless, skinless chicken thighs marinated with oregano & garlic, then baked."  I added a Té Helado (orange-mango iced tea) for caffeine as no coffee drinks were available. It came with  rice (topped with choice of pink or black beans) and salad. The San Rafael menu promised fried plantain or fries, but were not available at the pop-up on opening day. 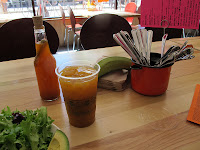 My chicken was moist and savory, though not particularly exotic.  Fortunately, I was able to enhance it with a house-made sauce (found bottled on each table).  I was told to use this mildly spicy, slightly tart and slightly sweet sauce liberally, and it did wonders for both the chicken and the salad. The house-made orange-mango iced tea was wonderfully refreshing though a touch too sweet for my tastes, though probably not so for most people, as I tend to be sweetness-averse.  My lunch came to $13.50 including tax (service is cafeteria-style, so tipping is discretionary), a little steep for a worker's lunch, novelty value of Puerto Rican food in the area aside. Nonetheless, I'll likely return to try something else during the pop-up's tenure, which is said to be every weekday through June (per Gub Street). 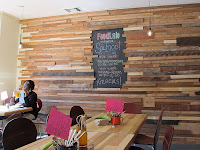 The dining space at SF FoodLab is light, airy and attractive, though spare. There is a small bar at the back, which was unused except by a laptop squatter during my visit. Latin music played in the background, though at a very civilized level (meaning NOT LOUD).  According to Grub Street, future popper-uppers (poppers-up?) include Russell Jackson (ex-Lafitte), Aaron London (ex-Ubunto) and the ex-Frisee pair who currently operate the Southern Sandwich food truck.
Posted by Gary Soup at 12:14 PM